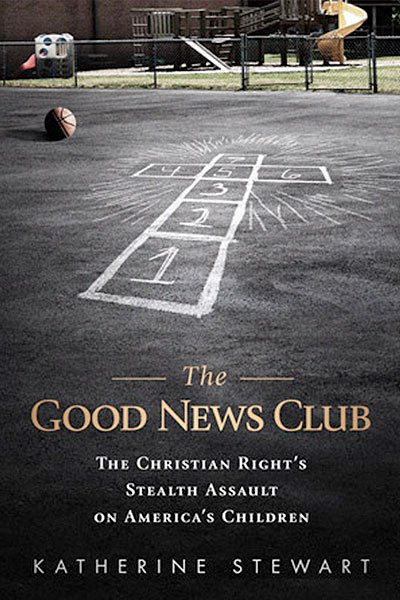 Katherine Stewart’s chilling exposé of the well-funded, highly coordinated effort by Christian Nationalists to use public schools to advance a fundamentalist agenda.

In 2009, the Good News Club came to the public elementary school where journalist Katherine Stewart sent her children. The Club, which is sponsored by the Child Evangelism Fellowship, bills itself as an after-school program of “Bible study.” But Stewart soon discovered that the Club’s real mission is to convert children to fundamentalist Christianity and encourage them to proselytize to their “unchurched” peers, all the while promoting the natural but false impression among the children that its activities are endorsed by the school.

Astonished to discover that the U.S. Supreme Court has deemed this—and other forms of religious activity in public schools—legal, Stewart set off on an investigative journey to dozens of cities and towns across the nation to document the impact. In this book she demonstrates that there is more religion in America’s public schools today than there has been for the past 100 years. The movement driving this agenda is stealthy. It is aggressive. It has our children in its sights. And its ultimate aim is to destroy the system of public education as we know it. Published in January 2012.

Chapter 2: All Part of the Plan

The bumper stickers plastering the SUVs in the parking lot are defiant: “Evolution is a Big, Fat, Lie,” “Abortion Stops a Beating Heart,” “Marriage = 1 Man + 1 Woman,” “Obama is not Jesus: Jesus Could Build a Cabinet.” I wonder if I stand much chance of blending in with this crowd. I spent some time the previous evening considering just what one should wear to a National Convention of the Child Evangelism Fellowship. I’ve chosen a knee-length skirt and pale pink sweater, and I have my hair pulled back in a prim braid.

It’s late May in Alabama, and the air smells of white cedar trees and the spicy bloom of wild geraniums. The walkways are lined with forsythia, columbine, and Virginia pine. Neat cinder-block buildings dot the hills of the 600-acre wooded campus. Along the hiking trails that snake throughout the property are rest stops outfitted with benches for contemplation and ten-foot-tall crosses. A tranquil pond is stocked with floats and rowboats. I find my way to the large, multi-use building that serves as one of the convention center’s main gathering spots, as does the large, cathedral-like chapel.

This year, the convention has attracted about 450 attendees. Everybody appears to be affiliated with the CEF in some official capacity. Most are higher-ups on the totem pole: senior staff of the Warrenton headquarters and regional leaders from all over the country. Other attendees head up the CEF’s youth, military, and prison ministries, write CEF textbooks, act as area coordinators, and serve other important roles in the organization’s functioning.

Every morning of the convention starts with a 7 a.m. prayer session for CEF workers in a room designated as one of the convention center’s smaller chapels. This morning, about fifty attendees take their seats, ready for prayer. From my spot toward the back of the room, I can smell coffee and fried breakfast foods being prepared elsewhere in the convention building.

The first thing that strikes me about the crowd is the large number of men in attendance. Most conventions organized around education and children—gatherings of curriculum experts, school volunteers, even Sunday school teachers or other religious education employees—are heavily dominated by women. Here at the national convention of CEF, however, the men equal or outnumber the women.

“How’s it going at that school you were telling me about? The one where the principal was – you know – uncooperative?” a gray-haired gentleman in a plaid button-down shirt asks a younger friend in a white vest. “We slaughtered ’em!” the younger man replies. They both nod, satisfied. Throughout the convention, a phrase that I keep hearing is “kicking in the doors”—as in “We’re going to kick in the doors of every public school in the country!” The men are uniformly dressed, as though from a dated edition of The Preppy Handbook, in khakis, plaid shirts, and crew-neck sweaters, and most are in middle or late middle age, though there is a sprinkling of younger men. Some of the men are accompanied by wives; others appear to be single.

I notice with alarm that my efforts to blend in are an abysmal failure. My subdued pastel getup is no match for the boisterous prints and separates that dominate the group. Even more atypical, of course, are my Semitic features. Naturally, I would have answered a pointed question about my religion truthfully—I am Jewish—but I do not want to be asked; I do not want my interactions to devolve into a forum on my ethnicity, which would not be productive for my research. I am resolved to simply say as little as possible and allow people to make their own assumptions.

On my way in, a participant suspiciously asks me what church I belong to, and I answer that our family is affiliated with an Episcopalian church. (In fact, at the time our son was attending an Episcopalian preschool.) “Is that a Bible church?” she sniffs disparagingly. Strangely, I have spotted more than one Star of David worn around the necks of fair, Germanic types—which I take to be either an appropriation of the notion of “chosen people” (several Baptists have told me that they consider themselves to be “ingrafted” as the “new chosen”) or an expression of Christian Zionism in which the State of Israel is the linchpin for ushering in the end-time.

Near the chapel entrance I bump into Joan, who flew into Birmingham on the same plane I did. Joan is based in Los Angeles. Pale blond hair falls in soft waves to her shoulders; she wears a black T-shirt with silver sequins around the collar and white clam-diggers. In her early sixties, she seems friendly and curious.

Joan wasn’t saved until her forties. By then she was divorced, with two young boys. “My life was a mess,” she says, offering few details. They don’t matter anymore because faith has provided her with a brand-new direction, a clean and certain future. But it hasn’t completely extinguished her suffering.

Joan believes firmly that we are living in the last days on earth before the Second Coming. “In these End Times, you never know what’s going to happen,” she says, commenting on a dramatic volcanic eruption in Iceland that has clouded parts of Europe. For Linda, signs of the End Times are everywhere: earthquakes in Chile and Indonesia, an oil spill in the Gulf of Mexico, a failed bombing attempt in Times Square.

“Isn’t it just awful how much the terrorists have changed our lifestyle?” she says.

Before joining CEF, she had never taught children before. Now she instructs a class of up to forty kids every week. She was nervous about teaching at first. But the behind-the-scenes support for her and others like her, courtesy of the CEF, is so substantial and so expertly coordinated and delivered that it gave her the confidence she needed. Indeed, it leaves almost no room for novice teachers such as Joan to fail.

Joan and I are joined by David, a wide-framed, bearded man, probably in his forties, who has been working for CEF for twenty-three years and currently runs CEF Military Ministries. The night before, he met us at the airport and took us by minivan to the convention center.

He and Joan trade stories about the CEF classes they teach. Joan acknowledges how all-consuming work with CEF can be. Teaching a Good News Club, she says, requires as much personal commitment as a full-time job. “I’m in awe of how much effort they put into it, and what they do to prepare us,” she says, then offers enviously: “I know one lady who recruited a bunch of homeschooled kids to teach her clubs in the public schools. Now she barely teaches at all, just spends her time helping to train them!”

“It’s important to get young people involved,” David assures her, “[like] homeschooled kids who are willing to step up and volunteer.” He tells us that there are up to 120 kids in some of his classes.

“But some doors are harder to open than others,” he says darkly, “so we partner with Cadence International [a large, evangelical Christian military ministry] and say, ‘You pry open those doors and we will do the work in the harvest fields.’”

“That’s great,” says Joan. “This one superintendent in L.A., she was telling the teachers she was going to run us out of the school.”

David responds with a relaxed laugh. He knows he is on the winning side of this war.

“Even those well-versed in the religious right's attempt to Christianize American institutions will likely be shocked by The Good News Club. Katherine Stewart's book about the fundamentalist assault on public education is lucid, alarming, and very important.”

“In The Good News Club, Katherine Stewart unveils a world of stealth ideological warfare, where public schools undergo forced conversions into evangelical churches, other people's children are missionaries' most important 'harvest field,' and biblical literalism is served with free candy and pizza after school. With deep reporting and a keen sense of the larger picture, the stories in this book demonstrate how far-right activists have co-opted the principle of tolerance to advance an exclusionary agenda.”

Kathryn Joyce, author of Quiverfull: Inside the Christian Patriarchy Movement

“Stewart chronicles just how divisive the infusion of religion—in the form of proselytizing Good News Clubs, school building rentals to church groups, and axe-grinding school textbook committees—can be. And although many of these activities are represented as emerging from grass-roots community demands, Stewart exposes a much more coordinated effort, much of it springing from national evangelical organizations and affiliated legal strategy networks.”

“The author is a great digger for facts and a respectful narrator as she brings to light a group's efforts to bring fundamentalist Christianity to U.S. public schools...[A] fascinating exposé.”

“Katherine Stewart’s riveting investigation takes us inside the world of the Child Evangelism Fellowship, a sprawling organization that aims not just to evangelize America's schoolchildren, but with the help of lawyers and policymakers, to dismantle the separation of church and state. From the playground to the courtroom, Stewart explores how, despite roiling communities and pitting neighbors against each other, their persistence has paid off, altering the relationship between public schools and religion.”

“From her reporting in Seattle, [Katherine] Stewart travels to other locales with Good News Clubs and related evangelical efforts aimed at children inside and outside school buildings. To her amazement, she learns that a 2001 ruling by a majority of the U.S. Supreme Court, agonizingly split as usual along philosophical divides, permits the melding of church and state. (The ruling is titled Good News Club v. Milford Central School, with justices Antonin Scalia and Clarence Thomas pushing to alter what seemed like settled law — the separation of church and state — to many citizens.) Stewart treats all sides fairly because she cares about factual and contextual accuracy. There is no doubt, however, that she is dismayed at the spread of the Good News Club movement. Each reader will need to decide whether the dismay is warranted.”

“Stewart’s book is impressive in scope and painstakingly researched. These clubs should be of concern to everyone—not just atheists, Jews, Muslims, Hindus, Catholics, and liberal Christians, all of whom would be targeted by the CEF to be ‘counseled for Salvation’—but to anyone who values the idea that government and religion should be kept separate.”